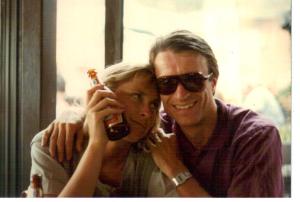 We come now to the winter of our years
(Where did the autumn with its pleasures go?)
Our roof will all too soon be cloaked with snow,
So, come, let’s stoke our fire against the fears.

It seems another life ago, my dear,
That full of grace you pilgrim sat aglow
Enkindled so this prodigal would know
That grace was free and grace was very near.

Midsummer’s eve brought more epiphanies
Of spotless bride adorned, redeemed, in white,
Too ill for customary liberties,
So wan, yet still for these sore eyes a sight.
Then! Over Lake Champlain the full moon sees
A railway sleeper car rock through the night.

When love is good and it lasts, it can be tempting to idealize its beginnings.

But, the very first time I saw my wife, she was glowing. I kid you not. Sitting in the second row of a darkened auditorium listening to the Chaplain of the U.S. Senate, there she was —  surrounded by a golden aura.

At the time, I was a reporter for a small suburban weekly paper, and was there on assignment.  I had a camera, but was so befuddled I failed to get the shot. You might argue I was imagining things, but I don’t think so. I’m not given to visions nor hallucinations. I’ve never witnessed anything like it before or since.

I kept my eye on her while I got my story.  But at the end of the program, she went right up to the speaker.  I figured she must be with the group of important people who had accompanied him from Washington, D.C.

So, I put The Glowing Girl out of mind and tried to forget about her.

Fortunately for me, she turned up again a couple of weeks later at church.  She was a friend of a friend, who introduced us and immediately left us alone.  I didn’t let her get away a second time.

I think the whole experience was a special gift for a fellow a bit slow on the uptake, who needed a sign to notice a good thing right under my nose.

That’s my story and I’m sticking to it.

We were married at Midsummer.  She was sick and only made it through the festivities with the help of cold medicine.  The next morning we flew out of town to New York, and the very next night, took an overnight train to Montreal.

I’ve been a fan of railway travel ever since.