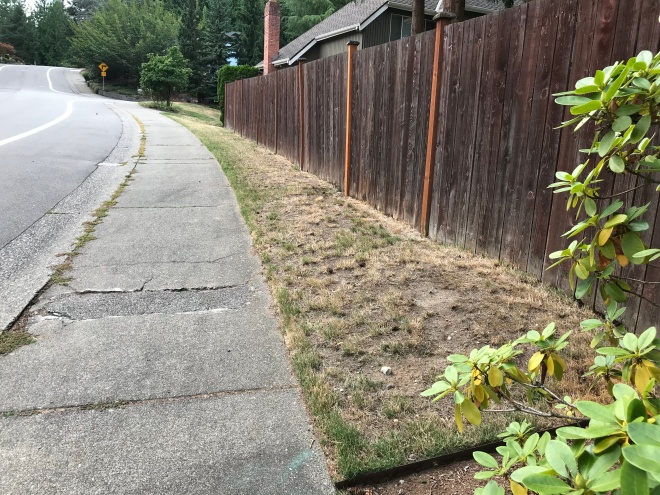 Late summer’s sun has baked the grass to brown.
The days grow shorter with each passing day,
Soon, autumn’s chill will make the leaves fall down.
All of this aching beauty will decay.

And yet I love the shadows’ slanting trace,
The once green grain gone golden in its rows,
And how I love the lines etched in your face.
It’s funny, as love ripens how it grows.

The number of our days we do not know.
No sleeper knows if he will ever wake.
So come, let’s join above, between, below.
My dear, let’s cause our fragile clay to quake.
Let us make love as if it’s our last go.
Let us embrace like dawn will never break.

Notes:  T.S. Eliot said April was the cruelest month. I disagree. I think it’s August. The ground is parched, the foliage is showing its mortality, and it’s clear that we’ve passed high summer and we’re on the downhill slide. Nothing gold can stay and the highway dust is over all.

Extra credit to any poetry geek who can spot the homage to John Donne in this poem.

One of my literary-minded friends has introduced me to the America poet Hayden Carruth, who lived from 1921 to 2008.

I’m not sure how I could have gone so long and gotten so old without finding him.  (Just another example of the gaping holes in my education, I guess.)

Carruth is growing on me.

Like Robert Frost, he moved to the Vermont countryside and learned to how to farm.  Carruth’s poems about some of his country neighbors are vivid, precise character sketches that remind me of the country folk I knew in my youth.

Like Frost, Carruth did a bit of teaching to help pay the bills.  He was aware of the looming shadow Frost cast over later Vermont poets, and he played with it a bit in some of his poems.

He dwells at that intersection between classic poets from an earlier age who paid attention to meter and rhyme, and the moderns of the last century, who reveled in the free innovation for the sake of innovation.

His poem, Late Sonnet, written later in his life, is one of his most interesting, I’ve read yet.

For that the sonnet no doubt was my own true
singing and suchlike other song, for that
I gave it up half cold-heartedly to set
my lines in a fashion that proclaimed its virtue
original in young arrogant artificers who
had not my geniality nor voice and yet
their fashionableness was persuasive to me,–what
shame and sorrow I pay!
+++++++++++++++++++++And that I knew
that beautiful hot old man Sidney Bechet
and heard his music often but not what he
was saying, that tone, phrasing, and free play
of feeling mean more than originality,
these being the actual qualities of song.
Nor is it essential to be young.

I read this as the confession of a poet who abandoned the craft he knew in his youth to pursue the fashionable trends of modern style.  He contrasts the pretentiousness of modern poets — the “arrogant artificers” — with the pure horn playing of jazzman Sidney Bechet, who — according to Carruth — emphasized feeling over originality.

Carruth developed this idea more fully in an interview published in Contemporary Authors.

“When I was young and starting to write poetry seriously and to investigate the resources of modern poetry, as we called it then, we still felt beleaguered; modern poetry was still considered outrageous by most of the people in the publishing business and in the reading audience at large.

“We still spoke in terms of the true artists and the philistines. We felt that if we could get enough people to read T. S. Eliot and Wallace Stevens and e. e. cummings and William Carlos Williams and other great poets of that period, then something good would happen in American civilization. We felt a genuine vocation, a calling, to try and make this happen. And we succeeded. Today thousands of people are going to colleges and attending workshops and taking courses in twentieth-century literature.

“Eliot and Stevens are very well known, very well read; and American civilization has sunk steadily, progressively, further and further down until most of the sensible people are in a state of despair. It’s pretty obvious that good writing doesn’t really have very much impact on social events or national events of any kind. We hope that it has individual impact, that readers here and there are made better in some way by reading our work. But it’s a hope; we have no proof.”

Carruth has helped me put my finger on what has bugged me about so much of modern poetry for a long time. I couldn’t quite define it until now. But after reading this, it has come into focus.

In the secular despair of the 20th Century, artists sought to take the place of God, who had been declared dead by the wise men of the age.

As Carruth said, “if we could get enough people to read T. S. Eliot and Wallace Stevens and e. e. cummings and William Carlos Williams and other great poets of that period, then something good would happen in American civilization.”

Cultural restoration through poetry!  Moral improvement through exposure to art.

The divine revelation of the Bible had been debunked courtesy of Darwin and Freud and others, faith had been undermined, and the vacuum that was created was seeking to fill itself with the work of artists and poets.

I would submit that this is much too big an assignment for poetry.

Don’t get me wrong.  I hold a pretty high view of poetry.  It can do a lot.  It can inspire, comfort and bless a soul.  It can express rich and deep feeling in elevated language. But I think the artistes of the last century reached too far.

My hypothesis is that this poetic overreach was responsible for much mischief — and a lot of unreadable poetry in the 20th Century.

Lest  you think I am making this up, Stevens was explicit about his intention to replace God with poetry.

According to Poetry Foundation, Stevens maintained that art was “the new deity in a theologically deficient age. Abstraction is necessary, Stevens declares, because it fosters the sense of mystery necessary to provoke interest and worship from humanity.”

I find Stevens’ abstraction cold and heartless — and frankly boring.

I disagree with his premise and his conclusion.  Just because Stevens didn’t believe in God didn’t mean that God was dead. (Please note: this theory is still under construction.)

The poet can cease stop trying to take the place of God and settle back into the role of a human created in the image of God, creating beauty that reflects the beauty of God and his creation.  And also telling the truth about the tragedy of how the creation has fallen.

Reading T.S. Eliot has had at least one effect. I’ve taken a break from writing about love.

Eliot wrote about the big things. Faith. Despair. The sweep of history. The spirit of the age.  Weaving in references to the best expressions of Western civilization … and beyond. Whatever you think of him, he was a serious fellow.

Not claiming this little poem is like Eliot, or in the same league. But it does come out of a heart and mind that has been reading him. It’s not a “silly love song.” It’s a stab at being serious.

A worm works through the apple of us all,
A mold grows slowly over all our work,
Our vaunted gleaming towers all will fall
As delegates palaver jackals lurk.

Anesthetized within our paneled homes,
Believing what has been will always be,
With weariness we author countless tomes
That give not wisdom nor help us to see.

A dust has settled over all the land,
Our wise men jabber loudly on the wall.
As good is named for evil, good is banned,
In silent shadows meanwhile serpents crawl.
This proud and stiff-necked people shall not stand.
The tribes of earth shall marvel at its fall

I’m really trying to like T.S. Eliot. But mostly because I think I should.

People I respect swear by him. I’ve always found him fussy, obscure and generally not worth the effort.

Now, on the occasion of the 50th anniversary of his death, Eliot seems to be everywhere. He’s got me surrounded!

Then I read where one of my favorite living writers, Mary Karr, calls Eliot her “Secret Boyfriend,” and I think I need to do more to overcome my benighted condition and check this guy out.

This is the same Mary Karr who wrote her famous essay, “Against Decoration.” As is says on the back of her book of verse, “The Devil’s Tour,” she calls her own poems “‘humanist poems,’ written for everyday readers rather than an exclusive audience — poems that do not require an academic explication to be understood.”

Amen to that, Mary! But how am I to square that with your literary crush on Eliot? He’s the guy who added seven pages of explanatory notes a the end of “The Wasteland.” Notes that really only help if you’ve recently brushed up on your Latin, Italian, French and German!

I realize there are gaps in my education big enough to drive a tanker through.  So the problem must be with me, not Eliot.  So I dip my toe in, gingerly.

April is the cruelest month,

Early in “The Love Song of J. Alfred Prufrock” he gives us a fantastic extended metaphor of the yellow fog as an animal “rubbing its back on the window panes.”

But then he goes and opens up a poem with this eight-syllable-one-word line:  Polyphiloprogenitive.

And then there’s his aggravating habit of introducing a poem with a quote from another author.  In French.  Or Latin.  Or Greek.

To the casual observer, it would appear that Mr. Eliot was trying to reduce his audience down to the smallest number possible.  Today, that number must be even smaller, made up of just the handful of professors who to have miraculously managed to get a classical education before our institutions of higher learning went all soft in the head.

I do not want to sound like one of those Know-Nothings who mistrust anyone with book-learnin.’  But I know from my day job that if you want to get your stuff read and understood, you must write clearly and remove the friction for the reader.

Can it be possible to write profound poetry and have people understand it at the same time?

I think I’ll start with “The Hollow Men” and see how it goes.  It’s short and written exclusively in English.  I think I’ve got a fair shot as extracting some meaning from it.  My goal is to gain a little momentum, move on the “The Wasteland,” and then be strong enough for “Ash-Wednesday” by the time we get to week of Easter this year.

We’ll see if my patience holds out.