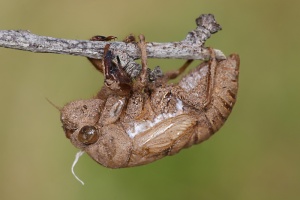 Back in Missouri where I grew up, we had an insect about the size of the end of your thumb that folks called locusts.

The proper name for these critters was “cicadas,” but for me, they will always be locusts.

These bugs made a terrible racket when they started their serenade. Some sources say the noise is so loud it can damage the human ear.

I won’t take that bet. They can be exceedingly annoying.

But they are also fascinating because they molt and leave behind an almost perfect exoskeleton. As a kid, I would collect these artifacts like little relics.

My fellow poet over at Dancing Echoes recently wrote a haiku about these creatures.

Dancing Echoes does a great job coming close to the original idea of haiku.

The old haiku masters combined words with beautiful calligraphy and drawings to form a total experience.

Dancing Echoes pairs each poem with a beautiful photograph. In this effort, she approaches the complete experience achieved by the old masters. You could say it’s haiku for the modern age.

The cicada haiku from Dancing Echoes reminded me of an old poem sitting in my files gathering dust. It’s not haiku. But it does feature a cicada — or rather, a locust.

SOMETIMES IN THE
MOONLIGHT

Sometimes in the moonlight
The feeling comes afresh,
The old familiar feeling,
The aching of the flesh.

Sometimes in the summer
The noisy locust strains
Against the skin that holds him.
To shed his crusty chains.

When the trees grow weary
Of their summer masquerade,
And fallen leaves are gathered
I hunger for the shade

Of limbs that never falter
And love that never cools,
Where ruin never alters,
And where death never rules.

6 thoughts on “You say cicada, I say locust”