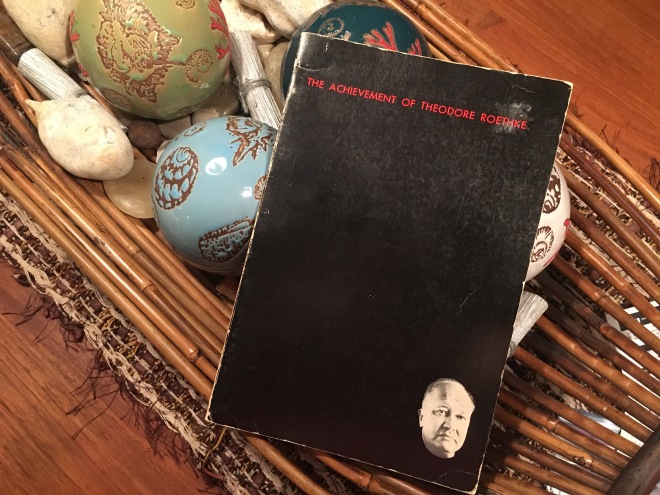 Guys, read this poem to your beloved

Poems get on my list of favorites for different reasons. Some are so sublime they make the list on the first ballot, like Gerard Manley Hopkins’ Pied Beauty. It may just be the perfect poem, in my humble opinion.

Other poems come along at just the right time, and hit me right where I’m at.  They earn a place on my list by virtue of good timing. Robert Frost’s Reluctance is one example.

Then, there are those poems I wish I had written myself …

I found one of these while on vacation.  Before I left, I threw a battered old collection of poems by Theodore Roethke in my carry-on bag.  I had just picked it up at my local used book store for 3 bucks.  It contains a real gem.

Apparently Roethke’s I Knew a Woman is quite well known.  Apparently, it pops up in anthologies all over the place.  The book’s introduction calls it “one of the most famous poems of our time.”  But thanks to my pitifully spotty education, I had failed to encounter it until now.

For your sake, I’ll copy the whole poem here:

I Knew a Woman

I knew a woman, lovely in her bones,
When small birds sighed, she would sigh back at them;
Ah, when she moved, she moved more ways than one:
The shapes a bright container can contain!
Of her choice virtues only gods should speak,
Or English poets who grew up on Greek
(I’d have them sing in chorus, cheek to cheek.)

How well her wishes went!  She stroked my chin,
She taught me Turn, and Counter-turn, and Stand;
She taught me Touch, that undulant white skin;
I nibbled meekly from her proffered hand;
She was the sickle; I, poor I, the rake,
Coming behind her for her pretty sake
(But what prodigious mowing we did make).

Love likes a gander, and adores a goose:
Her full lips pursed, the errant note to seize;
She played it quick, she played it light and loose;
My eyes, they dazzled at her flowing knees,
Her several parts could keep a full repose,
Or one hip quiver with a mobile nose
(She moved in circles, and those circles moved).

Let seed be grass, and grass turn into hay:
I’m martyr to a motion not my own;
What’s freedom for?  To know eternity.
I swear she cast a shadow white as stone.
But who would count eternity in days?
These old bones live to learn her wanton ways:
(I measure time by how a body sways).

What makes me want to have written this poem?

It’s so full of life and love and good humor.  It’s original and clever.  I’ve never read anything quite like it.

Just take a look at that third line:  Ah, when she moved, she moved more ways than one.  If that’s not evocative, I don’t know what is!

But the 3 lines that rhyme rake, sake and make, cinch the deal.  The audacious metaphor contained in these lines warms the heart of this old farm boy.

The double meaning of the word rake, as both the farm implement and the profligate, is a wonderful pun.

(At least the poet gets to be the rake, and not the grass! Although he “nibbled meekly,” he gets to have a complementary role in the hay-making. He doesn’t just get mowed down by the sickle.

Another line that jumps off the page:  (She moved in  circles, and those circles moved.)

Then in the last stanza, the poet turns reflective.  He’s aware of his mortality, but grateful for knowing the love of this woman.  It somehow has allowed him a glimpse of eternity.

All in all, this is a wonderful poem to read to your beloved, especially on vacation. I can vouch for it.

I just wish  I had  written it, though!