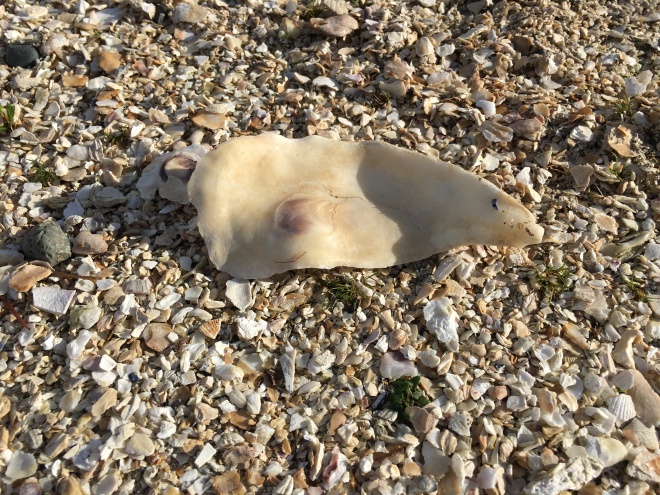 As the Oyster Forms the Pearl

As the oyster forms the pearl,
So the poet pens the verse
As balm for the current ache
Born out of the ancient curse.

As the oyster feels compelled
To shellac the sandy grain,
So the poet feels the urge
To transmogrify the pain.

So the pearl grows rich and round
As its luster covers the sand.
So the verse unseen takes form
In its way, designed unplanned.

Sad the pearl that lies unseen
In the depths of the murky sea.
Sad the verse that dies unheard
In the heart clandestinely.

So the diver frees the pearl,
Breaks the stony shell apart.
So the poet frees the verse
Ripped out of his broken heart.

There’s a pretty spot along Fjord Drive in Poulsbo, Washington, called Oyster Plant Park. I don’t know the details of the history, but if you were going to put up an plant to process and can oysters it seems like good place.

Liberty Bay is shallow, and at low tide, it reveals a large expanse of shoreline covered with shellfish.

The first time I walked along the shore I was puzzled by the way oyster shells were littered all about the surrounding neighborhood. It looked like it has been raining oysters. Shells in the street. Shells in yards. Shells on the roofs of houses.

I determined that the hungry gulls must have figured out how to snatch the oysters from the shore, fly to a proper height, and drop the unfortunate mollusks so they would crack open. Brutal but effective.

That place sparked a metaphor, which turned into this extended metaphor of a poem, which, as my high school English teacher Paul Hagedorn reminded me, is properly called a “conceit.”