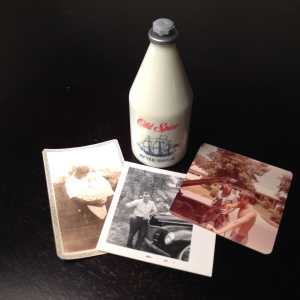 Amidst the clutter,
Dad’s last bottle of Old Spice.
I’ll wear some today.

NOTES:  One of the most precious mementos I found as we prepared my parents’ home to be sold a couple of years ago was a bottle of my father’s after shave lotion tucked away in a bathroom cabinet.  He must have purchased this particular bottle just before he went into the nursing home because it was still nearly full.

Dad had been an Old Spice man as far back as I could remember, and the rich fragrance stirred up a host of memories.  You see, this last bottle dates back to the 1980s and it smells completely different from today’s weak sauce sold under the Old Spice brand.

Proctor & Gamble bought the Shulton company in 1990 and started changing things.  I noticed that the glass bottles gave way to plastic.  The grey stopper changed to red.  But worst of all, the new owners messed with the formula of the lotion itself.

When I found that old bottle of my Dad’s and took my first whiff, I was shocked at how much stronger and complex it was compared to the modern recipe.

I hadn’t smelled that classic fragrance for decades, and there is something powerful about the olfactory sense that connects us with the past.

Dad had taught me how to shave lathering up his Old Spice shaving mug and soap and brush.  I scratched off my thickening peach fuzz using his heavy-duty razor, the kind that took the old style disposable blades.

Of course, I nicked myself and he had to show me how to staunch the bleeding with an alum stick.  Thank goodness he didn’t use a straight razor.  I probably would have bled to death.

Dad taught me how to change oil and change a tire.  And though he was a master mechanic, he never was able to get me beyond the most basic level of automobile repair.  My fault, not his.

Dad taught me more important things, as well.  Things like keeping your word and doing an honest day’s work.  Things like owning up to your mistakes and saying you’re sorry.

Although the Great Depression short-circuited his education and forced him to drop out of high school to earn a living, he never stopped learning.  He left behind a robust collection of books including the writings of ancient historians and early church fathers.

He took his faith seriously, and didn’t make it too complicated.  The most worn of all his books was his Bible.  It was literally falling apart from use, held together with duct tape.

Of course, as a teenager, I was much too smart to go for my father’s myths and legends.  It was only after pursuing my own path and hitting some rough dead ends that I wound up pretty much where he had been all along.

It was amazing how much wiser the Old Man seemed to me when I was 28 than he did when I was 18.

He taught me perseverance in hard times.  When his one foray into business failed when I was in grade school, he swallowed his pride, got up the next day and went to work for someone else to support his family.

When my brother Bill died in a scuba-diving accident leaving a wife and 3 young kids, my Dad flew halfway across the country to handle matters.  In the midst of what must have been his own inconceivable grief, brought that little family back with him and took care of them until they could get back on their feet.

The most poignant lesson Dad taught me was about faithfulness as demonstrated by how he treated my Mother.  Theirs was not fairytale romance.  When they got married in the depths of the Great Depression, Dad was working on a farm crew for a dollar a day.  He had to talk his boss into giving him Saturday off so he could have the whole weekend for a honeymoon.

They started out dirt poor, and only very gradually worked their way into what might be called the lower middle class.  It was a great day when we moved to town and got central heat and indoor plumbing!

But, to me, theirs was a great love story.   Dad always treated Mom with affection and respect.  There was never any question about his loyalty to her.  And, when Mom eventually began her long slide into dementia, Dad cared for her personally.  And when she finally had to enter a nursing home, he visited her every day and spoon fed her lunch.

So, a couple of times a year, I pull out that grey stopper from Dad’s last bottle of Old Spice and splash some on my face in his honor.  All day long I catch whiffs of bay leaf and clove and cinnamon, and I’m reminded of what it means to be a good man.

One thought on “Father haiku”