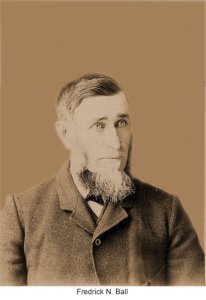 Yankee ancestor,
Had Reb been a better shot
I wouldn’t be here.

I’ll pull out an old poem in honor of my last direct ancestor to be wounded fighting to defend our freedom.

In my case, we must go back a bit.  All the way to the Civil War.  My great grandfather, Frederick N. Ball, was serving in General Sheridan’s Army in the campaign to take the Shenandoah Valley in Virginia.  When the Battle of Cedar Creek broke out, Sheridan was several miles away in Winchester.

As Sheridan was riding furiously back to rally his troops to victory, my ancestor was crawling back to safety after having been shot through the side early in the campaign.

The family story relates that he stuffed a rag in the hole in his side and made it to safety.

Thankfully, he survived.  Otherwise, this blog would be sadly empty today.